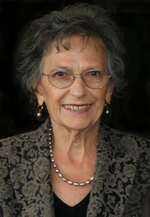 Pietra Genua: Her Story
On May 24, 2020, in the early hours of the morning, at the age of 95, Pietra Genua passed away peacefully in her family home surrounded by those who loved her dearly.
Pietra was a feisty, strong-willed and loving woman. Born on November 29, 1924 in Vita, Italy, to two humble farmers, Giuseppa and Bartolomeo Perricone, she lived her youth in a small Sicilian village with her 4 siblings: Caterina, Anna, Giuseppe and Antonio. There she stayed until she met the love of her life and made her journey to Canada in September 1952 with nothing but a suitcase and ambition. She travelled to her new life with her two-year old daughter, Josie. She, like many others, was embracing an adventure in Canada with her beloved husband, Pietro, who had arrived one year before to prepare for their arrival. At the beginning, Pietra did not adjust well to life in Canada, but eventually, the work ethic that allowed her to embrace a difficult life through a depression and war allowed her to flourish in unknown territory. As a seamstress, she worked at a men’s tailoring company for many years to support her family.
Pietro and Pietra bought their first house on Rogers Road and moved to North York in the early 60’s, purchasing the home they would live in for the rest of their life together. She was doted on by her loving husband, and she fiercely loved him in return. Eventually, Pietro opened his own business called White Bunny Cleaners, and Pietra supported him with her beautiful tailoring skills. Together, they made the perfect team. They travelled often and enjoyed life, always including their many brothers and sisters and their beloved daughter.
Family was part of who Pietra was. Her and her husband opened their hearts and their home to many other siblings, cousins and friends who made the trek to Canada and had nowhere to stay; there was always room in the Genua household. Pietra’s big heart always had a ready table filled with pizza, olives, cheese and laughter for her family and friends. Evenings were spent playing cards and telling stories, each person yelling just a little louder than the other.
Pietra was not only a loving wife but a fierce and supportive mother. She was always proud of Josie, her only daughter, for completing her bachelor’s degree at University of Toronto, becoming a teacher and the first member of the family to attend university. She supported Josie in all of her endeavours with fierce loyalty. Pietra was also immensely proud of her grandchildren and great-grandchildren, doting on them constantly.
Pietra is survived by many people who loved her dearly: her daughter Josie and son-in-law Sal; her grandchildren, Cathy, Peter, Daniel, and Daniel’s wife Knara; her great-grandchildren, Giuliana, Alessio and Elina; brother-in-law Joe; sister-in-laws Concetta, Maria and Rosalia, and countless nieces and nephews.
Now, Pietra is reunited with her husband, Pietro, and her siblings. They will welcome her to the gates of heaven with open arms.
She will be dearly missed.


Sometimes extenuating circumstances make it difficult to attend a service. Memorial webcasting gives family and friends the opportunity to view a service live, online from anywhere.

This event may be open casket and the livestream may contain views of the deceased.